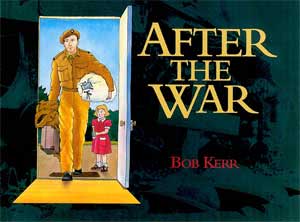 In 1945, upon returning from World War 2, a soldier and his family plant an apple tree in front of their house. The text follows this tree through years – 1950, 1955, 1960, 1965, 1970, 1975, 1980, 1985, 1990, 1999 – and through seasons – summer, autumn, winter and spring. Although the text tells a basic story of the life of this tree, the real story is in the illustrations, in which the details tell the reader a great deal about history unfolding in a geographical sense, as well as for the family personally. Looking carefully at the illustrations, one can see new buildings going up – a city developing in the background, and planes and cars changing and becoming more modern as the years go by. For the family, there are marriages, babies and losses. And of course the apple tree grows bigger each year. This is a powerful story told mostly through illustrations about change and progress and about family and togetherness. When the apple tree is blown down in a storm 54 years later, the family plant a new kowhai tree in the same spot, and in this act a new sense of New Zealand identity is reflected.